Keep up with the latest news about DVGRR!

The Delaware Valley Golden Retriever Rescue (DVGRR) returned from Texas last night with 17 dogs. A group of three employees, one board member, and four volunteers departed for Austin, TX on Friday, Sept. 1, 2017 to rendezvous at Austin Pets Alive! with two golden retriever rescue groups from the Houston area and to also rescue dogs that had been in shelters prior to Hurricane Harvey in order to make room for dogs displaced by the storm. 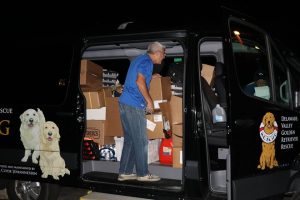 “It’s very important to understand that the dogs we transported were in shelters or housed by rescue foster homes awaiting adoption prior to the storm,” said John Plummer, DVGRR Executive Director. “In doing so, we helped the groups in Texas have more space to hold storm-displaced dogs and will hopefully be able to re-unite them with their owners.” 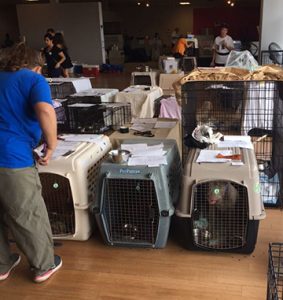 DVGRR traveled to Austin loaded with requested supplies, including a critically needed microchip reader. Other items included collars, leashes, and crates plus medications.

“We sent an email and posted on our Facebook page that we’d be going and asked for donations. The response before we left was overwhelming,” said Plummer. “Additionally, we donated certain medications from our own supply and Penn Veterinary Supply stopped by with 10 cartons the night before we left.”

The 17 dogs now at DVGRR’s Golden Gateway campus will undergo veterinary exams and behavior assessments before being released for adoption. Those interested in adopting should complete an adoptions questionnaire that can be found online at www.dvgrr.org. 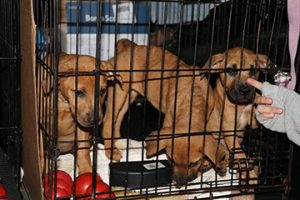 We are grateful for everyone who donated towards this mission and for your continued support for the DVGRR Dogs! We also want to thank our local media for giving us special coverage and our Facebook followers for sharing the posts so our dedicated supporters and followers could keep up with the mission!