Beware of problems with peanut butter before feeding it to your dog! 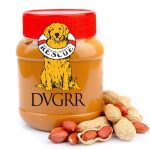 Peanut butter – it’s a treat dogs love, and at Golden Gateway, we stuff Kongs® with peanut butter or make peanut butter biscuits that dogs get as a naptime or bedtime snack. Perhaps your dog also gets peanut butter in some form or another. However, peanut butter can be deadly for your dog… even deadlier than chocolate.

The problem isn’t the peanut butter. Instead, the problem is the xylitol that may be in the peanut butter. Xylitol is an alternative to traditional sugar that can be extracted from woody fibrous plant material like corn cobs or trees. It’s naturally occurring in our bodies as well. In its pure form, it is a crystalline substance that looks and tastes like sugar. For humans, it’s a safe sugar substitute. For dogs, however, it is extremely toxic!

In both humans and dogs, blood sugar levels are controlled by insulin released from the pancreas. When a person eats something containing xylitol, it does not stimulate an insulin release; however, in dogs, xylitol triggers a rapid release of insulin that results in a dangerous drop in blood sugar levels – hypoglycemia that can be life-threatening. Ultimately, xylitol leads to liver failure.

Xylitol can cause hypoglycemia in as little as 30 minutes. Signs of hypoglycemia include vomiting, weakness, lack of coordination, lethargy, tremors, seizures, and coma.

How Much and Where?

It only takes a very small amount of xylitol to be toxic to your dog. For a 70-pound Golden or Labrador, just over three grams will cause hypoglycemia and about five times that amount leads to liver failure. To get a better visual, picture the typical sugar packet. That weighs about one gram. A deadly dose would be about 15 of those or 15 sticks of gum containing xylitol.

Mints, candies, toothpaste, mouthwash, chewable vitamins, and, of course, peanut butter are all products that may contain xylitol. Certainly, you don’t feed your dog gum, but has he ever raided the pantry or gotten into your bag or purse? And what about the peanut butter we use as a dog treat? Be vigilant and read the label! If you see xylitol listed as an ingredient, it’s a definite no-no for your dog.

However, you should also be alert for other keywords like “natural sweetener” or “sweetened naturally.” There is a misconception that xylitol is an artificial sweetener – it is not. Another keyword to watch for on the ingredient list is “sugar alcohol.” Complicating matters is that the exact amount of xylitol in a product does not have to be disclosed. In fact, many manufacturers guard this information as a trade secret. The amount of xylitol a product may contain may be less than what is considered toxic for your dog, but why take a chance? Keep in mind that xylitol is 100 times as toxic as chocolate for dogs.

Despite all of your precautions, what should you do if you suspect your dog has ingested xylitol? First, as with any emergency, contact your veterinarian immediately, or in this case, you can call the Pet Poison Helpline (855-764-7661) or ASPCA Animal Poison Control Center (888-426-4435). Unless you are specifically directed to do so, do not induce vomiting. It could make your dog worse.

There is no antidote for xylitol toxicity; however, fast, aggressive treatment (that may include IV fluids and liver-protecting drugs) can reverse toxic effects and prevent the onset of serious complications. If your dog is not showing symptoms but there is a suspicion of ingestion, your vet may induce vomiting to avoid further absorption. Once symptoms develop, your dog’s treatment will be based on those. Your vet will likely perform a blood test to check for glucose and potassium levels – both driven down by xylitol.

Your dog will also be hospitalized to monitor blood sugar levels, receive IV support, and liver protectants as well as other supportive care. Blood work will need to be monitored regularly. If the dog receives treatment before symptoms develop or for those in which the hypoglycemia can be rapidly reversed, prognosis is usually good for recovery. However, if liver failure occurs, the prognosis is generally poor, and if coma occurs, prognosis is very poor.

If there were ever a case of prevention being worth a pound of cure, it’s with xylitol. Make certain your read the labels of peanut butter and other human products you may feed your dog and keep toothpastes and mouthwashes – along with candies, gum, and mints – safely out of reach of your dog.

Check the PreventiveVet.com site that features a very broad list of products that contain xylitol.